If you are new to Kratom or a regular buyer, it is natural to keep an eye on the Kratom ban update, provided all the legality fuss surrounding the Kratom herb. Even though there is no scientific evidence about any ill effects of Kratom, it is still banned in a handful of countries and a few states in the US.

This also leads to frequent law changes about Kratom all over the world. For example, when Thailand is discussing overturning a decades old Kratom ban, there is noise about the Kratom ban in Indonesia, which is the largest source of Kratom for now.

This is why if you are a regular Kratom buyer, just beginning with Kratom, or often travel with Kratom, it is important to learn about Kratom ban update. This will help you avoid any unwanted legal situation.

In this article, we will discuss everything happening all across the US when it comes to the Kratom ban.

To start with, Kratom is a legal herb at the federal level. You can easily buy Kratom in the US from your local stores as well as from hundreds of online options. In most online stores, you can find a wide range of Kratom strains available in popular product forms like Kratom capsules and Kratom powder.

However, Kratom laws vary from state to state, so you need to keep an eye on the Kratom ban update if you frequently travel between states.

States Where Kratom is Banned 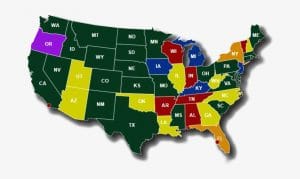 Kratom is currently banned in six US states. These states include Wisconsin, Vermont, Rhode Island, Alabama, Indiana, and Arkansas. Out of these, NGOs like the American Kratom Association and other Advocacy groups are trying hard to overturn the ban in Alabama, Arkansas, and Indiana.

In Rhode Island and Vermont, there are pending legislation that, if passed, will legalize Kratom in these states.

Next, there are several states out there where Kratom is legal, but with pending legislations for both regulating Kratom and banning Kratom.

Even though there is a consistent effort by the DEA and FDA to ban Kratom in different states and even at the federal level, there is no immediate threat of such a ban.

There is an equally consistent resistance by Kratom enthusiasts, advocacy groups, NGOs, and associations like American Kratom Association to not only keep Kratom legal in the country but also overturn the ban in the states and cities where Kratom is made illegal.

One of the best sources to keep a check on the Kratom ban update is the American Kratom Association’s website. The AKA is the largest Kratom association in the country, with hundreds of thousands of members. It not only keeps the Kratom enthusiasts updated about all the legal happenings around Kratom but also fights legal battles with DEA and FDA to keep Kratom available for American buyers.

In addition, you can also follow our Kratom blog as we update Kratom related news articles regularly. Other than that, you can also become part of different Kratom forums and discussion platforms, like Reddit Kratom.

We are sure you now have learned about every latest Kratom ban update, at least related to the US. A lot is going on, with dozens of pending legislation in different states to regulate and to ban Kratom. In some states, attempts to ban Kratom have failed, while Advocacy groups are trying hard to overturn the bands in states where Kratom is currently illegal.

To keep updated about all Kratom news, feel free to follow our Kratom blog. We cover all Kratom related news and also write detailed guides on Kratom strains and different products.