Typically, Kratom is categorized based on the vein color, with red, white, and green vein Kratom being the widely accepted classification. Of all three strains, Red vein Kratom is the most popular and commonly sold Kratom variety, and for all the right reasons.

In this article, we’ll discuss Red Kratom, its origin, and how it differs from other strains. Why is red vein kratom named so? Arising in most Kratom enthusiasts and novices’ minds, this question has quite a simple answer.

Keep reading to learn more about red Kratom and decide if you want to purchase it as this month’s supply. 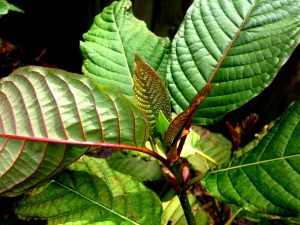 As the name indicates, Red Vein Kratom comes from leaves with red veins. Like all other Kratom colors, red Kratom also has distinct properties.

Apparently, enthusiasts appreciate and prefer red Kratom’s properties, as it has a higher sale than white and green vein Kratom combined.

The plant comes from Southeast Asia and grows well in a humid climate and arid conditions.

Why is Red Vein Kratom Red?

Traditionally, Kratom strains got their names from their color, and we use the same naming method today. Thus, the three main colors, as we know them today, came to global attention.

What imparts this distinct color to the Kratom leaves?

The difference in leaf vein colors is due to the length of the growing period and maturity. Green Vein Kratom is the least mature of the three as it comes from leaves that are harvested early during the growth period. 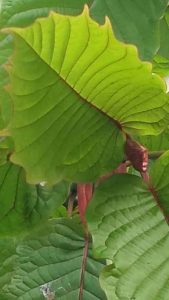 Meanwhile, White Vein Kratom is a product of leaves that grow for a moderate duration.

Lastly, the Red Vein is the most mature as the leaves stay on the tree for the longest time. It’s not easy to pick and process these leaves as a delay in harvesting can render them useless.

Thus, experienced farmers work in the fields for the task. They know the right time to pick the leaves for producing high-quality Kratom that has developed its characteristic properties.

Furthermore, the Red Vein Kratom comes from the maturest leaves, so as far as the alkaloids are concerned, it is the richest.

It contains a high concentration of alkaloids, with Mitragynine being most abundant. Along with this vital alkaloid, other compounds are also present in red Kratom in trace amounts.

Why is Red Kratom Named as Such?

When buying red Kratom, you’ll notice that another secondary name always suffixes ’ Red’. Mostly, the Kratom’s source country or city becomes a part of its name, as Kratom strains are named mostly after origin.

However, not all varieties are named after their respective origins. Instead, some strains’ names come from the leaf shape and slang in the common tongue.

Another name you’ll often see is Red Horn Kratom. The name ‘horn’ comes from the leaf shape, which resembles a horn closely.

So, if you’re able to decrypt the name of Kratom strains, you can learn a lot about their origin. However, this wouldn’t tell you much about their characteristics and is merely a way to feed your thirst for Kratom knowledge.

As mentioned earlier, red Kratom is an ultimate favorite among veteran Kratom enthusiasts. Thus, if you’re taking a suggestion from a friend, they’ll most probably tell you to buy Kratom in the red vein form for the first time.

When you’re buying Kratom, make sure you only get it from suppliers that do not compromise on quality and safety. Harvesting and processing this strain is the most laborious and complicated due to the longer time it takes for it to mature.

So, you must only buy from sellers that source their products from reputed farms and reliable suppliers. If you’re buying for the first time, only get a small packet, or you can begin with capsules, as they’re easier to store.

As red vein Kratom is available in different varieties, you’ll have a ton of options to choose from.

We can understand why red vein Kratom intrigues so many beginners and Kratom enthusiasts. It’s the maturest and most characteristic of all, so naturally, Kratom lovers tend to buy it more often.

If you’re planning to buy it this month, make sure you choose the right seller or ask a friend for referrals.

Hopefully, this guide would have helped clear the questions in your head about red Kratom. Now, you can head over to a credible sellers’ website and place your order for the herb. In case you want to learn more, check out our Kratom blog.